Andrew James Paterson has been producing videos, music and performances for almost forty years. However, his active engagement with all three media is united by a single and often solitary act: writing.

Kunstverein Toronto and Cooper Cole are very pleased to present I Stand Collected/Corrected, a three day exhibition by the senior Toronto artist Andrew James Paterson held in conjunction with the launch of Collection/Correction, the first survey of his writing edited by independent curator Jacob Korczynski. Co-published by Kunstverein Toronto & Mousse Publishing and designed by Laura Pappa & Lotte Lara Schröder, Collection/Correction is a book anchored upon a series of new and recent poems by Paterson, scripts of his videos The Walking Philosopher (2001), Eating Regular (2004), 12 x 26 (2008) and Passing (2013) as well as four of his fictocriticism texts that were published in Eldon Garnet’s IMPULSE Magazine between 1980 and 1989.

I Stand Collected/Corrected will disperse the three facets of the book throughout the space at Cooper Cole: a site-specific configuration of the four videos that are represented by way of their scripts; a selection of the poems printed on laminate; and the four original layouts of Paterson’s texts from IMPULSE Magazine colour customized by the artist.

Of Collection/Correction, Vera Frenkel says: “Congratulations to co-publishers Kunstverein Toronto and Mousse Publishing for Andrew James Paterson’s Collection/Correction, a book we’ve been waiting for! Paterson’s unique voice accompanies us into some of the darker places of the human journey, while sourcing unexpected empathy and humour along the way. Kudos to editor Jacob Korczynski for persuading Andrew to allow this re-publication of an important group of his early writings in book form together with recent and new concrete poems, and a selection of video scripts – a rich mix.”

Andrew James Paterson (b. Toronto, 1952) is an interdisciplinary artist working with video, film, music, performance, and writing. He has exhibited and performed his works since 1979; and Collection/Correction marks the first survey of his practice. All of his work, regardless of discipline, shares concerns with language, bodies, and technologies; as well as a fascination with shifting paradigms between public and private realms. He has contributed to many periodicals and anthologies involving media-arts, high and low cultures, and artistic systems. His writing has been published by YYZ Books, IMPULSE Magazine, FUSE Magazine, FILE, PUBLIC and LOLA amongst others. His videos have been presented locally, nationally, and internationally, including DokFest in Kassel, Germany; EXPERIMENTA in Bangalore, India; EXIS in Seoul, South Korea; MIX in New York, USA; and at the Images Festival and Inside Out in Toronto amongst many other venues. His video work is distributed by V/Tape. He was a founding member of the influential band The Government and he is currently a member of DERWATT.

Production of Collection/Correction was made possible through the generous support of the Canada Council for the Arts and the Ontario Arts Council. 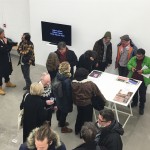