Anna Banana explores the historical and contemporary implications of mail art and highlights a unique approach to humour, disguise, and the democratic potential of print media and critique. The show features Anna Banana’s artistamps, Banana rags, mailers, postcards, posters and costumes made over a forty-five year period.

Some of Banana’s interventions featured will actively engage the gallery audience in creative projects both on the opening night and in the course of the exhibition.

After declaring herself the town fool of Vancouver in 1971, denouncing her given name and taking on her new name, Anna Banana initiated numerous activities including performances and travelling art projects such as the infamous Banana Olympics, the Going Bananas Fashion Contest, as well as publications such as the magazines Banana Rag and About Vile. Through these publications, and via her extensive correspondence within the international mail art network (IMAN), Ms. Banana became a central source of exchange with and for international colleagues while, at the same time, deeply exploring the varied connotations of her alter ego. And although her practice might seem peculiar in its consistently absurdist tendencies, bordering, at times, the behavior of an obsessive collector, it is deeply rooted in artistic traditions like Futurism, Fluxus and Dada.

Her practice also lends an insightful and personal look into the democratic potential of print media and its inherent social, political critique. Early on in her career she got to know the artists behind Image Bank, Michael Morris and Vincent Trasov – whose own claim to fame includes running as Mr. Peanut in Vancouver’s 1974 mayoral election. The contacts she made via their Image Bank Request List, a global mail exchange network, led her to become a key figure in mail art and one of the very few female artists associated with the group. With the rise of the Internet and increasing postal costs, mail art was doomed, yet many of the same questions are now being picked up by a younger generation. The exhibition Anna Banana offers an historical overview of this practice that forms an urgent and contemporary alternative response to our current socially saturated and mediated world.

Born in Victoria, BC in 1940, Anna Banana has lived and worked in Victoria, Vancouver, Big Sur, Sooke, San Francisco and currently, Roberts Creek, BC.

Since 1971, her mail-art practice has generated a wide range of work, including international performance tours (Futurist Sound, Proof Positive Germany is Going Bananas, Banana Communion, But, is it Art?) and large, interactive public events (the Banana Olympics; ‘75 in San Francisco, ‘80 in Surrey, BC.).

Special thanks to Art Gallery of Greater Victoria and Canada Council for the Arts. 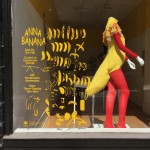 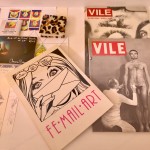 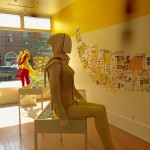