Organized in collaboration with D St-Amour.

G.B. Jones (b. 1965, Bowmanville, Canada) is recognized for many accomplishments: for the success of her post-punk band Fifth Column (1981–2002), the widespread influence of the many queer punk zines she co-authored, including J.D.s, Double Bill and Hide, her coining of the term “queercore,”and her prolific work as a “no-budget” filmmaker, scene photographer and visual artist. Her drawing series, “Tom Girls,” originally published in J.D.s, replaced Tom of Finland’s iconic, “hyper-virile studs” with bold, uncompromising leather dykes, co-opting Finland’s objectified, male-on-male erotica and presenting a world of “nasty female role models.”1

In 1994, Feature Inc. + Instituting Contemporary Idea in New York released G.B. Jones. The monograph, edited and designed by Steve Lafreniere compiled Jones’ “Tom Girls” drawings alongside show and film posters, record covers, comics and commissioned writing. As part of a campaign by the Canadian Border Services agency against allegedly pornographic or immoral materials in the 1990s, copies of Jones’ book were seized by the Canada Border Services Agency and barred from entering the country on the charge of depicting “bondage.” Jones was later informed that the seized copies had been burned by Border Control agents.

27 years later, in collaboration with Jones, Kunstverein Toronto is putting G.B. Jones back in circulation in Canada. A re publication of the book will launch on August 6 alongside an exhibition of related drawings, photographs, posters, ephemera and tributes that reflect the reach and influence of Jones’ heterogenous practice, both at the time of the original release of G.B. Jones, and today.

The artist will be signing copies of the book at Cooper Cole gallery on August 6 from 5–7pm.

The project was curated by Kunstverein Toronto together with research and publication direction by D St-Amour.

G.B. Jones (b. 1965 Bowmanville, Ontario, Canada) is an artist, filmmaker, musician, and publisher of zines. Jones’ drawings first received notoriety when published in the Toronto-based queer punk zine J.D.s that she ran with Bruce LaBruce. Her prolific drawing series Tom Girls is widely recognized, and reimagines Tom of Finland’s drawings by replacing all the hyper masculine subjects with women, subverting the intent into a contribution to third-wave feminist art. In 2002, Jones began a series of collaborative collages with Paul P., many of which were published in the book A Queer Anthology of Rage. Jones’ spray-painted images of Ionian columns— one of which is permanently installed at Cooper Cole— references her post-punk band Fifth Column (1981–2002) and suggests the weaving together of her music and drawing practice.

Jones has exhibited her art nationally and internationally since the early 1990s, in spaces such as Columbus Museum of Art, Columbus; Participant Inc., New York; Mercer Union, Toronto; The Power Plant, Toronto; Kunsthalle Exnergasse, Vienna; White Columns, New York; AKA Artist Run Space, Winnipeg; Muncher Kunstverein, Munich; and Schwules Museum, Berlin. She was included in the 2012 exhibition This Will Have Been: Art, Love, and Politics in the 1990s, which was curated by Helen Molesworth for the MCA Chicago and subsequently travelled to the Walker Art Center, Minneapolis, and the ICA Philadelphia. She has also exhibited at national and international galleries including David Zwirner, New York; Cooper Cole, Toronto; Paul Petro Contemporary Art, Toronto; Feature, New York; Galerie Clark, Montreal; and Or Gallery, Vancouver. G.B. Jones lives and works in Toronto, Ontario, Canada.

Nat Pyper is an alphabet artist based in Brooklyn, NY. In their work and writing, they use language as a sieve and they push the body through it.

The exhibition is made possible with thanks to Canada Council for the Arts and Cooper Cole Gallery. 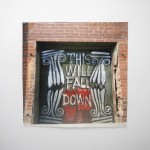